Continued from "A Canterlot Wedding – Part 1". 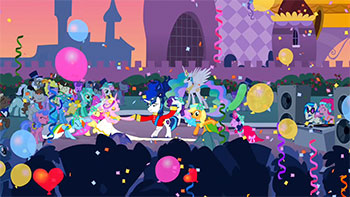 You should see what happens before this...
This day has been just perfect~
The kind of day of which I've dreamed since I was small.
Everypony I'll soon control!
Every stallion, mare and foal!
Who says a girl can't really have it all?
— Queen Chrysalis
Written by Meghan McCarthy
Advertisement:

Twilight finds herself in a dark cave, magicking up a light from her horn, wondering where she is.

Cadance's evil laughter fills the air heralding her appearing and vanishing in faceted reflections overhead, mocking Twilight and saying there's nothing she can do to stop her — and that Twilight will be forgotten and imprisoned forever. Twilight, undaunted, gives chase and attacks with magic, before breaking through a wall and tumbling into — Cadance?!

The truth is revealed: Twilight was right to be suspicious about her old friend's behavior — because it wasn't really her! The real Cadance proves her identity with their Secret Handshake and explains that the Cadance Twilight met was an impostor seeking to take over Canterlot. With all the misunderstandings cleared, they escape the caves and arrive at the wedding just in time to expose the deception.

Now that the jig is up for the fake Cadance, she reveals herself to be Chrysalis, the queen of the Changelings, a race of emotion-eating beings with the power of mimicry. Chrysalis set her sights on Canterlot because, as the capital of the country with the most love in the world, it can feed her subjects — the other changelings — indefinitely. She smugly announces that her ruse as Cadance enabled her to turn Shining Armor into her puppet and weaken him so much that his protective force field won't hold against her army.

Princess Celestia rises to challenge the evil impostor, but to the surprise of everyone — Chrysalis included — she is defeated.

Twilight and the others race to get the Elements of Harmony, but they run into Chrysalis's army. They fight a pitched battle against changelings magicked to look like them until they too are overwhelmed and captured.

Chrysalis's victory is absolute: Canterlot is invaded, Celestia is imprisoned, the bearers of the Elements of Harmony have been neutralized, and Shining Armor's defensive power is completely drained. When the evil queen pauses to gloat, Twilight quietly frees Cadance, who uses The Power of Love to break the changeling's hold on him. He is exhausted, but Cadance puts the strength of her love behind him, and he finds the power to put up his defensive barrier again. The changelings are swept from Canterlot and cast into the wilderness beyond Equestria. The day is saved!

The real wedding can finally take place. Twilight is reinstated as Best Mare and her organizational skills pull the whole thing together with dazzling speed, with Cadance enthusiastically participating. The ceremony is sweet and beautiful, especially for Twilight when Shining warmly tells her that he persuaded Cadance to accept his proposal with the fact that she would gain Twilight as a sister-in-law. As night falls, Princess Luna arrives, and the reception begins in earnest. Everypony dances, and as the couple departs, Shining thanks his sister for everything she has done with a warm reaffirmation of their love. As the carriage leaves, Rarity makes a spectacular dive for the bouquet, and Spike announces his intentions for the bachelor party.

Everypony lives Happily Ever After. For a time being anyway.

Not even a powerful Alicorn stands a chance against a love-powered Changeling.

Not even a powerful Alicorn stands a chance against a love-powered Changeling.