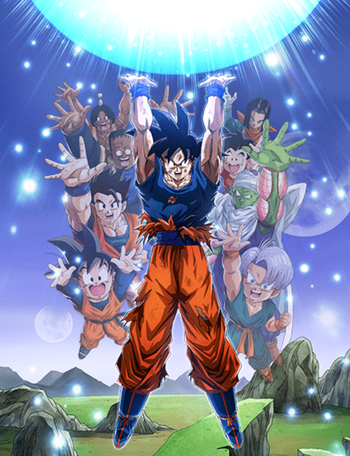 "Everyone! Share your energy with me!"
Jaaku King: Where do you get such power?
Cure Black: You've made a mistake! You're not just fighting the two of us...
Cure White: ...you're fighting all the life on this world! All that life is connected through us!
— Futari wa Pretty Cure MaX Heart
Advertisement:

A special attack that uses the combined energy of everyone in a cast with the coup-de-grace, usually but not necessarily, being delivered by the lead. It can be an actual attack technique, or it can be used as a powerup for something, such as a Super Mode.

A common subtext to the trope is that the worst villains are inevitably weaker because they don't have friends to help them. It's also a handy way of showing that the hero is very strong without nullifying the importance of the other cast members. Often combined with Gondor Calls for Aid, when the main group needs more energy than they themselves can generate. May be fueled by Innocent Bystanders. May include the Power of Trust and/or Clap Your Hands If You Believe. See also I Can't Do This by Myself.

Not to be confused with Combining Mecha or All Your Powers Combined.