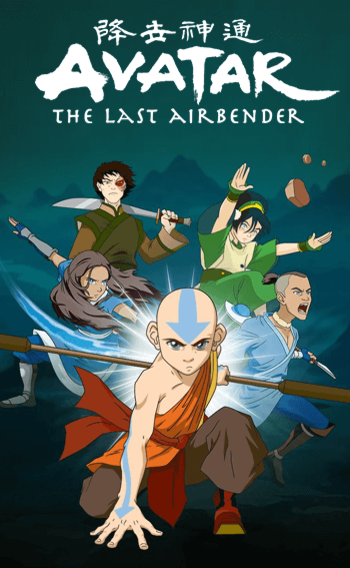 The legend of the Avatar begins... whether he likes it or not.note  Clockwise from front: Avatar Aang the airbender, Katara the waterbender, Prince Zuko the firebender, Toph Beifong the earthbender, and Sokka The Team Normal.
Water. Earth. Fire. Air.
Long ago, the Four Nations lived together in harmony. Then, everything changed when the Fire Nation attacked. Only the Avatar, master of all four elements, could stop them. But when the world needed him most, he vanished.
A hundred years passed, and my brother and I discovered the new Avatar, an airbender named Aang. The problem is, this Avatar is still a kid, and although his airbending skills are great, he has a lot to learn before he's ready to save anyone.
But I believe Aang can save the world.
— Katara, opening narration
Advertisement: