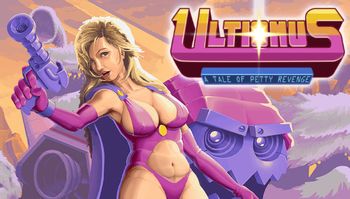 Ultionus: A Tale of Petty Revenge is a game developed by Last Dimension released in February 25, 2014. It is a sidescrolling platformer with Shoot 'em Up elements added.
Advertisement:

The game follows intergalactic hero Serena S after saving the galaxy once again. Deciding to brag about her exploits on Spacebook, she soon finds her post plagued by a troll: The Space Prince. Not one to let this slight stand, she proceeds to track down the Space Prince so that she can kick his ass for trolling her.

Ultonius: A Tale of Petty Revenge contains examples of: