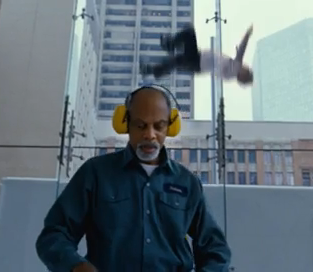 Nothing to see here, folks.
Advertisement:

A recurring gag in action or speculative fiction works where something absolutely incredible is happening outside, but then we cut to the inside of an office building and we see that the janitor is completely oblivious to what is going on around him, either because he has his headphones on, because his back is turned or because the cleaning equipment he is operating is too loud. Or possibly two or all three of the above scenarios combined.

A Sister Trope to Funny Background Event, with the twist that the "background" is now the main plot, and the funny event is brought to the foreground.

Not to be confused with The Almighty Janitor, who sees and knows all.