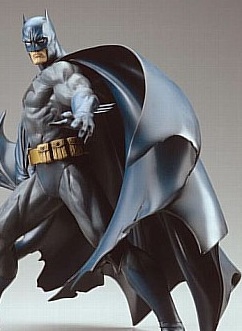 Respect the cape!
"Then he looked over at me, and y'know what he said? 'You can't handle the cape.' And he took it! He took my cape, Skeets! Do you know how it feels when Superman tells you can't handle a cape? Not good..."
— Booster Gold
Advertisement:

Capes have the obvious effect of making the wearer look larger and more imposing. Thus artists often use them as a way to make characters look capable, powerful, and in charge. Just look at Batman over there. He wouldn't look half as awesome without his cape.

The reasons for this are many. The color might provide a fetching counterpoint to the rest of their clothes, or else blend with them to give the wearer a dynamic silhouette. It may make them look even bigger than they really are. In the right conditions, they can wave in the wind and look dramatic and striking. Lack of wind can be accommodated with a Cape Swish.

But the main reason for this is that in the days of circuses, the strongmen often wore tights and a cape, thus the association with toughness in characters. The trope was then grandfathered into the present day by Superheroes.

This can apply to any character, whether it be a hero, sidekick, villain, and it doesn't even have to be a superhero setting.

This can also count if the actual capes have some sort of abilities. Thus the capes themselves are badass.

Often overlaps with Superheroes Wear Capes, All-Encompassing Mantle. Does not necessarily overlap with The Cape. May be used as an Improvised Parachute, but contrast Cape Snag.

Aside from it's dark, mystical look, Julith's cape appears to be alive, being able to attack, grab objects, act as a shield and serve as a multidimensional Bag of Holding.

Aside from it's dark, mystical look, Julith's cape appears to be alive, being able to attack, grab objects, act as a shield and serve as a multidimensional Bag of Holding.