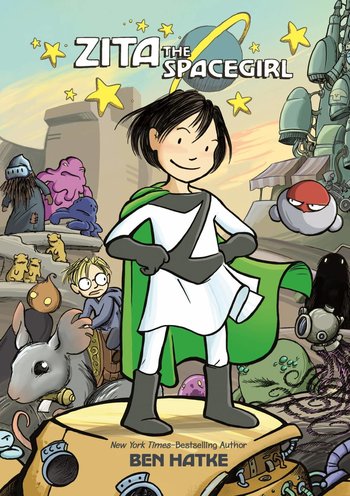 Zita the Spacegirl began in 2004 as a Webcomic by Ben Hatke, comprising a series of apparently unconnected online strips featuring the eponymous human girl and her humorous adventures with aliens and robots in outer space. A few of the original strips can still be viewed online here

. Others may still be viewable via the Internet Archive.

In the first book, Zita, a young Earth girl, along with her friend Joseph, sees a strange device fall from the sky. When Zita messes around with it, it opens a portal that takes the two kids to another planet. Joseph gets captured by a Screed, who brings him to a cult that believes he is the key to stopping a meteorite from destroying the planet.

Hopefully it's not too much of a spoiler to reveal that Zita doesn't get home straight away. In book 2 Zita capitalizes on her fame as the planet's savior, but soon discovers that being a hero is far more complicated than she'd expected.

Book 3 opens with Zita on trial for crimes she (mostly) didn't commit, but she soon discovers that being thrown in jail is the least of her worries as some of her friends are in danger and even the planet Earth may not be safe.

The Web Comics and graphic novels contain examples of: