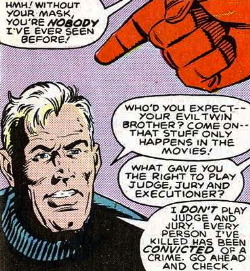 Lex Luthor: [standing in front of a mirror in the Flash's body] If nothing else, I can at least learn the Flash's secret identity...
[removes mask, stares at the face for a few seconds]
Lex Luthor: ...I have no idea who this is.
— Justice League Unlimited, "The Great Brain Robbery"

Someone rips off another character's mask or costume and reveals...

Well, that was completely pointless. The guy under that super suit could be the same guy bagging your groceries at Walmart. He could be your kid's soccer coach. He could be the President's niece's boyfriend. He's just one of a billion average faces amongst the entire human race.

When an Everyman hero is subject to this trope, it turns out that, in addition to his mask, The Hero has something much more powerful protecting his Secret Identity: obscurity.

Please note, however, that this doesn't mean that the mask is useless. All it would take is enough people getting a good look at his face (such as in print, on television, or—worse yet—on the internet) and the hero's identity is blown for good, as you'll eventually find people that do recognize the face and will fill in the blanks for everyone else. The mask helps keep the face beneath it obscure enough to keep him Hidden in Plain Sight.

Do not confuse with They Look Just Like Everyone Else!, when the villain has no alter ego and is simply too plain to distinguish from ordinary people, or The Un-Reveal, when taking away one mask simply reveals another. This can overlap with Stranger Behind the Mask, if the audience has never seen the unmasked party before. But this trope emphasizes that it's a stranger to the in-universe characters. Secret Identity Apathy tends to defy this.