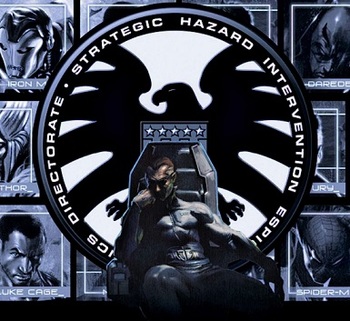 The masterminds behind the Marvel Universe.

THE Government Agency of Fiction.

There is always something beneath the surface.

Behind it all, behind the amazing, the incredible, the fantastic and even the uncanny, there exists dangers and threats that are rarely seen because they hide in the shadows or are too massive for most of the world to comprehend. Yet there is one organization that has taken it upon itself to safeguard the human race against the known and unknown. They are security, they are shelter... they are the S.H.I.E.L.D..

S.H.I.E.L.D. is the source of most, if not all, of the Spy Fiction in the Marvel Universe. It is the nebulous espionage organization that for decades was known as the "House that Nick Fury built". It first appeared in Strange Tales #135 (August, 1965). The organization is a UN or sometimes United States backed paramilitary and intelligence organization, whose acronym originally stood for Supreme Headquarters, International Espionage, Law-Enforcement Division but was changed in the 1990s to stand for Strategic Hazard Intervention, Espionage and Logistics Directorate. In the Marvel Cinematic Universe, the acronym was defined as the "Strategic Homeland Intervention, Enforcement, and Logistics Division".

There have been numerous series revolving around and featuring S.H.I.E.L.D. throughout the years, including long standing features in multiple Captain America runs. In the 2010s, Jonathan Hickman began delving deeper into the organization's history; first in Secret Warriors and then in two bimonthly mini-series. Another series launched in December 2014, essentially being an in-universe version of the first season of the Agents of S.H.I.E.L.D. TV show with Agent Coulson leading a team to investigate whatever weird stuff S.H.I.E.L.D. needs investigating; this was later relaunched under the show's title of Agents of S.H.I.E.L.D..

S.H.I.E.L.D. has also been a large part of several Marvel adaptations, including Spider-Man: The Animated Series, The Avengers: Earth's Mightiest Heroes! and Ultimate Spider-Man (2012). S.H.I.E.L.D. features notably in the Marvel Cinematic Universe as an important part of the series, being a recurring element in several movies and the focus of two TV spinoffs, Agents of S.H.I.E.L.D. and Agent Carter.

The S.H.I.E.L.D. organization provides examples of: