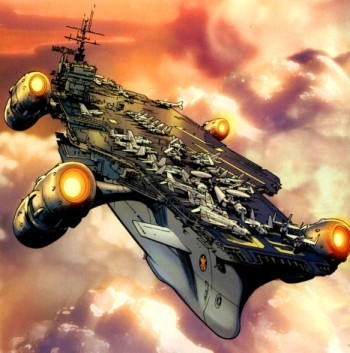 Flight has always fascinated humanity. First came legends of Winged Humanoids and Floating Continents, witches flying on broomsticks, then eventually airships and actual airplanes. When the aircraft carrier was invented, its sheer awesome (and force projection) made the battleship a military relicnote Although the potential weakness of the carrier vessel itself, should its air arm ever be somehow neutralized, has more than once induced the theorization of a carrier-battleship hybrid. Considering this, is it any surprise that people have wanted to combine the awesome of the airplane, aircraft carrier, zeppelin and floating continent into one?

Well, the result of this daydreaming is the Airborne Aircraft Carrier! This is a step above the simple boat most video games use to ferry the player around; it is a literal mobile floating fortress and airport, capable of raining Death from Above like few fictional Military Mashup Machines. At its most basic, it serves as a refueling station like an island in the sky; a carrier; add some guns to make it a combination battleship; and if you're into that sort of thing, robot transformations. A similar concept on a smaller scale is the usage of parasite aircraft piggybacking on larger ones, with latter being Drone Deployers— most of the Real Life examples are actually more like this than true "aircraft carriers".

As listed below, this one was attempted several times in real life. The best-known examples have been airships, which are also the only thing stable enough to link with the planes, not to mention have the lift and size necessary to house internal aircraft hangars, making them inherently suited for these sort of operations. Large airplanes (generally modified bombers, which have doors in the bottom that smaller planes can be launched through) have also been used. However, returning the aircraft to the mothership has proven too difficult in earlier tests of the concept for it to be considered practical, often resulting in the deaths of test pilots that tried and/or damage to both airplanes. And even when we managed to get the deployment and recovery issue figured out, storage turned out to be an even bigger challenge. The Goblin,

for example, had to be ridiculously squat in order to fit inside a bomber plane, making it largely useless as a fighter. However, the Soviet Union got the idea to work,

◊ and became the only country to actually use parasite aircraft in combat.

If it's a Living Ship, it's probably also a Living Gasbag, since flapping wings would be awkward on something this size. Compare to The Battlestar, which is this with heavy armament of its own and IN SPACE! Occasionally part of a Standard Sci-Fi Fleet.

S.H.I.E.L.D. prepares the Helicarrier for takeoff.

S.H.I.E.L.D. prepares the Helicarrier for takeoff.