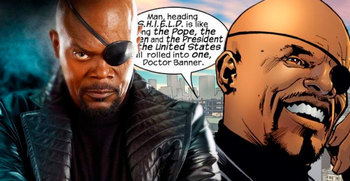 MCU Nick Fury (left) and Ultimate Nick Fury (right). See any similarities?
The Ultimate Marvel universe was conceived as a modern and grounded take on the Marvel Comics superheroes, focused on usual cinematic tropes that are often ignored in the genre. As a result, it is not surprising that many adaptations of Marvel Comics drew elements from the Ultimate line, in addition to the mainline Marvel Universe continuity of Earth-616.