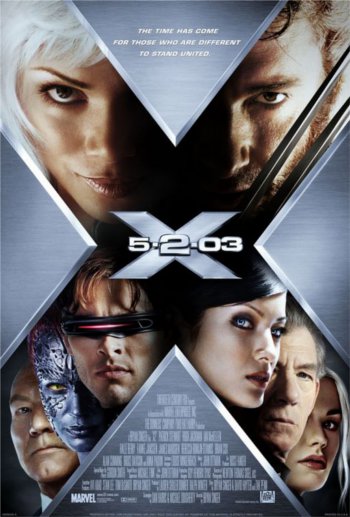 The evolution continues.
"Mutants. Since their discovery, they have been regarded with fear, suspicion, often hatred. Across the planet, debate rages: Are mutants the next link in the evolutionary chain, or simply a new species of humanity, fighting for their share of the world? Either way, it is an historical fact: Sharing the world has never been humanity's defining attribute."
— Charles Xavier / Professor X
Advertisement:

The second movie in the X-Men Film Series after X-Men, X2: X-Men United (sometimes promoted as just X2) involves mutants who are being mind-controlled somehow, starting with Nightcrawler attempting to assassinate the President; government operatives then kidnap Cyclops and Professor X.

The X-Men investigate and find out that the two are related: the soldiers are under the command of Col. William Stryker (Brian Cox), who is using a mutant to project false images into other mutants' minds. By brain-washing Professor X into overpowering the "Cerebro" telepathy machine, he intends to kill all currently-living mutants. Magneto and his Brotherhood Of Mutants ally with the X-Men to stop this from happening (hence the subtitle of the movie: "X2: X-Men United"). Meanwhile, Wolverine delves into his past involvement with the "Weapon X" project, which (of course) Stryker was in charge of.

Not to be confused with the series of sci-fi videogames by the name X, whose second entry is entitled X2.

Followed by X-Men: The Last Stand.

open/close all folders
A - H
I - Z
"Mutation: it is the key to our evolution. It is how we have evolved from a single-celled organism into the dominant species on the planet. This process is slow, normally taking thousands and thousands of years. But every few hundred millennia, evolution leaps forward."
Feedback