Throwing Out the Script 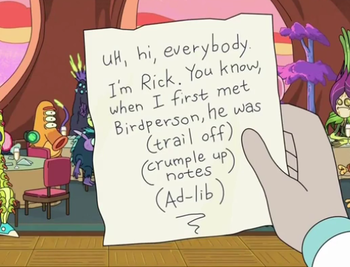 "I've outlined a ten-point plan, representing a new bilateral effort... I can't do this. If there is a War on Drugs then our own families have become the enemy. How can you wage war on your own family?"
— Robert Wakefield, Traffic
Advertisement:

Maybe, to your misfortune, mere moments before the actual speech, you are unknowingly a victim of a Satchel Switcheroo, where you're left with mortgage documents instead of your script. Perhaps you've had experiences that have changed your perspective on the speech you intended to give. Or you took a look at what someone else had prepared for you and thought, "Who Writes This Crap?!"

Sometimes you contradict the words in the speech, or piss off someone you promised not to. Other times, you might address yourself to someone in the audience, using a public platform for a private matter. Any which way, you are off message, big time.

See also Cue Card, and compare Unaccustomed as I Am to Public Speaking....

Not to be confused with Throw It In, when an actor figuratively throws out the script and improvises a line or action.