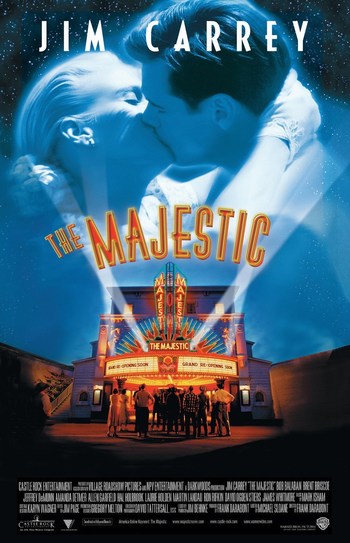 "Sometimes your life comes into focus one frame at a time."
— Tagline
Advertisement:

The Majestic is a 2001 dramedy film directed by Frank Darabont and starring Jim Carrey in one of his first serious roles.

It is 1951 and screenwriter Peter Appleton (Carrey) is about to get his big break when he's blacklisted as a Communist (due to his merely attending meetings of a group a prospective girlfriend was a member of, to impress her) and subsequently fired from the studio. No one wants to be associated with him, not even his actress lover, so naturally he heads to the bar and tells a bottle of beer all his problems...

After drunk-driving his car off a bridge, Peter miraculously survives, albeit without his memory. He wanders into the town of Lawson, California. In a bizarre coincidence, Peter is a dead ringer for Luke Trimble — one of the town's many young men who never returned from the war. Convinced that he's found his missing son, Harry Trimble (Martin Landau) takes Peter in and tries to pick their lives together back up where they left off.

Peter tries to fit into his new identity, hoping to regain his memories. Besides, it's not a bad life: Luke's beautiful lover, lawyer Adele Stanton (Laurie Holden), is all over him, the town has suddenly come back to life with excitement after years of mourning for their lost sons, and he and his "father" rebuild a movie palace Harry used to run, the Majestic. But all the while, the House of Un-American Activities Committee is hunting him down...