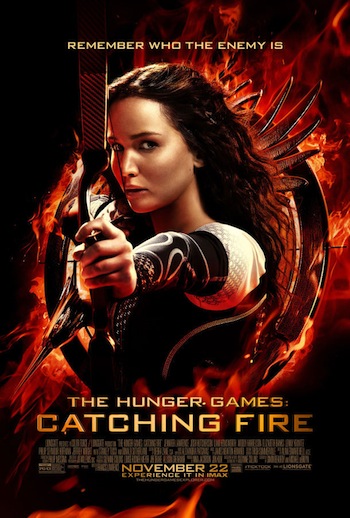 Every revolution begins with a spark.
"There's a way we can still win. It's what we Gamemakers like to call a 'wrinkle'."
— Plutarch Heavensbee

Months after the 74th Hunger Games, Katniss Everdeen (Jennifer Lawrence) struggles to cope with the trauma of the arena. Shortly before the Victory Tour, where the victor tours the twelve districts of Panem, she is brought before President Snow (Donald Sutherland), who informs her that her act of defiance in the games has inspired the districts to rebel.

She is then ordered to help pacify the districts by convincing them that her love for fellow victor Peeta Mellark (Josh Hutcherson) is genuine, but when she fails, only cementing her as a symbol of defiance, Snow and the new Head Gamemaker Plutarch Heavensbee (Philip Seymour Hoffman) makes preparations for the Third Quarter Quell, which is a special edition of the Hunger Games held every 25 years with a twist in the rules. This year, the Tributes can only be reaped from the existing pool of victors: Katniss is being forced back into the arena.