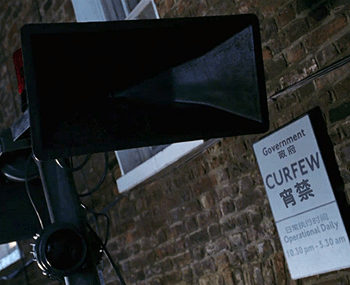 "This is for your protection."
A Militsya patrol stops a passerby a few minutes before the martial-law-imposed curfew. They check his documents and everything seems to be in order, so they let him go. But when the man turns to leave, one of the officers shoots him in the back.
"What the... why'd you do that!?" his colleague exclaims. The first officer shrugs.
"Oh, I know where he lives. There's no way he's getting home before the curfew."
— Old Polish joke
Advertisement:

Totalitarian governments are known for many oppressive means of controlling their citizens: taking Undesirables™ and forcibly removing them from the gene pool, filtering The News such that only information (accurate or otherwise) that makes the government look good can find its way to the eyes and ears of the citizens, collaborating with Mega Corps (of Peace & Love, Incorporated variety) to outlaw the Weird Trade Unions and their La Résistance in their own One Nation Under Copyright, making anyone who disagrees with the government disappear or thrown into Private Profit Prisons, and... making sure everyone goes to sleep on time?

Apparently many writers' favorite way to show that a government is evil and oppressive is to have said government instill on its citizens a practice that many parents would instill on their children anyway. In the minds of many writers, a curfew is the piece of martial law no self-respecting dictatorship can go without. Specifically: the government legally forces everyone to stay inside past a certain hour at night and until a certain hour in the morning. While normally you'd expect the penalty for a rule like this to be a simple ticket or fine, the actual punishments you will find range from immediate jailtime at minimum to summary execution at most. Narratively speaking, the authorities can say that someone is a rebel just for being about; it also means characters can fight in major urban areas without risking innocent lives. Sometimes the curfew isn't targeted at everyone but rather a certain group of people that the government believes is trouble or wants to oppress.

Other times, a democratic nation may declare a curfew in the wake of a natural catastrophe or epidemic, in order to prevent a nasty situation from exacerbating even further and to prevent looting and outright sabotage. Even so, often this curfew is a good early sign that the democratic government is starting to control people's lives, so they're useful as a sign of benign government turning into a cruel regime.