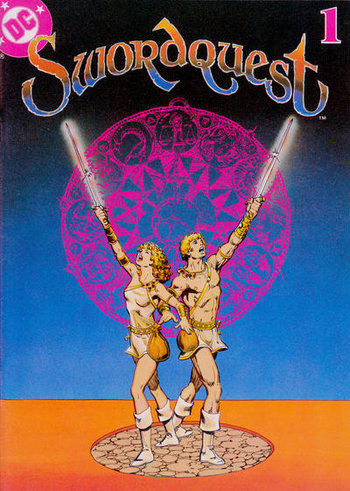 "I'd have gotten away with it too, if it wasn't for those meddling kids!"note Tarra is the one on the left with the skirt and the long curls, Torr is the one on the right without the shirt and with the bad haircut. Remember that now.
Advertisement:

Swordquest is the name for an unfinished Comic Book series developed and published by DC Comics, written by Roy Thomas and Gerry Conway and illustrated by George Pérez and Dick Giordano.

The books were an integral part of Atari's Swordquest adventure game series for the Atari 2600. Players would play the games and discover various numeric codes; the codes referred to page numbers and panels in a pack-in comic book, where the player would find a word hidden in the artwork. Players who found all of the words and assembled the correct sentence could then send it to Atari and be entered into one of the contests. There were four games and four contests in all, each with a $25,000 jeweled prize created by the Franklin Mint — the Talisman of Penultimate Truth, the Chalice of Light, the Crown of Life, and the Philosopher's Stone. The winners of these contests would then compete with each other for the grand prize, a Sword of Ultimate Sorcery worth $50,000.

The Comic Book itself chronicled the adventures of Torr and Tarra, orphaned twins who went into hiding because the evil King Tyrannus feared a prophecy of death at their hands. After crossing paths with the sorcerer Konjuror, they are visited by two mysterious guardians who start them on a quest for the Sword of Ultimate Sorcery, the only thing that can stop Tyrannus. The twins travel through four elemental worlds — Earthworld, Fireworld, Waterworld, and Airworld — braving various dangers along the way.

The series was never completed; The Great Video Game Crash of 1983 prevented the last game, Airworld, from being released. According to George Pérez, artwork for Airworld was never started, and while a synopsis might have been written by Roy Thomas and Gerry Conway, it never received final approval, much less a script.

The pack-in comics for Earthworld, Fireworld, and Waterworld can be read here.

Details about the games themselves can be found here.

Years later, a spin-off comic book story Swordquest Realworld by Chad Bowers and Chris Sims was released. Instead of finishing the plot of the original series' story, it was a story about a fan of the original game series and his obsession with it to the point where he wondered about its final prize.