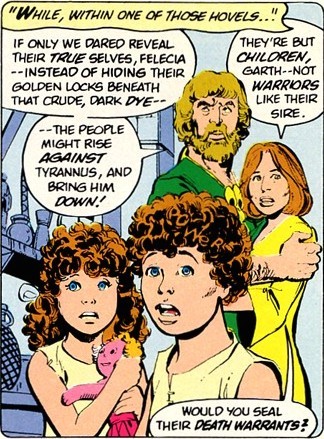 "Blonde hair is not allowed in the realm! King Tyrannus commands it!"
"All those prisoners with white hair, step forward. You are certain to have rebelled in 1848. You will be shot."
— General Gaston Alexandre Auguste de Gallifet, to the prisoners of the Paris Commune of 1871
Advertisement:

Nice, distinctive hair you have there, Ms. Heroine or Mr. Hero! But sadly, it's going to be a problem for you. Perhaps you find yourself in the midst of a Stern Chase, dodging trouble from the Space Mafia or close to getting your secret agent cover blown. You have a choice: Dye or Die.

So, you have to dye your hair as a disguise. Bye-bye, blonde highlights.

Men will also have to shave their mustache or beard, if they have one. Maybe grow one if they don't.

Compare Important Haircut; Expository Hairstyle Change; Wig, Dress, Accent (without the wig, the dress, or the accent); Kaleidoscope Hair (if it happens many times); and Clark Kenting.