Film / Sleeping with the Enemy 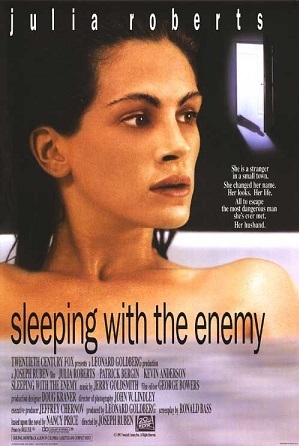 Sleeping with the Enemy is a 1991 psychological thriller film, directed by Joseph Ruben. It was based on a 1987 novel of the same name by Nancy Price.

Laura Burney (Julia Roberts) is a woman who seemingly has it all: a beautiful home, a wealthy and handsome husband, and anything she may desire. But her idyllic life is not what it seems; her husband, Martin (Patrick Bergin), is controlling and physically abusive. Laura comes up with a plan to fake her own death and finally get away from Martin, but he won't let her go that easily.