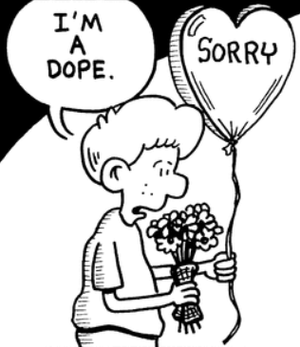 Frasier: Please, please, please forgive me. And do you think we have time to stop by Tiffany's on the way home?
Lilith: Good boy.
— Cheers
Advertisement:

Sometimes you screw up, and you know it. Your girlfriend, boyfriend, spouse, roommate, sibling, parent, or partner in crime is mad at you, and with good reason. How better to say "I'm sorry" than with a heartfelt gift?

Sometimes the gift is meant as proof of your sincerity... sometimes it may stem from a sense that just words aren't enough to make up for the wrong. Either way, when you give someone a gift as part of an apology, you're following a time-honored storytelling tradition.

There are a few standard apology gifts that show up consistently in media of all times. For couples, flowers (particularly roses) are a standard gift for a man to give his romantic partner when he's done wrong. If someone has really screwed up (or has a lot of money to throw around), jewelry may be offered instead of flowers. Food is also a popular apology gift, especially homemade food, or in a romantic relationship, chocolate. But of course, there are other gifts that may be offered instead. A common gag based on this is a spouse being given a gift automatically assuming (often correctly) that their lover's about to admit to something serious.

Compare Buy Them Off, in which the apology is not sincerely intended. If the screw up is one of epic proportions and requires considerably more than roses or jewelry to make up for it, see Must Make Amends or Redemption Quest.

Miss Woodhouse goes to Mr Martin, a young farmer, with a basket in hand to make amends. She persuaded Harriet, a girl Mr Martin loves and who actually likes him back, too, to refuse his marriage proposal.

Miss Woodhouse goes to Mr Martin, a young farmer, with a basket in hand to make amends. She persuaded Harriet, a girl Mr Martin loves and who actually likes him back, too, to refuse his marriage proposal.