Lifetime Movie of the Week 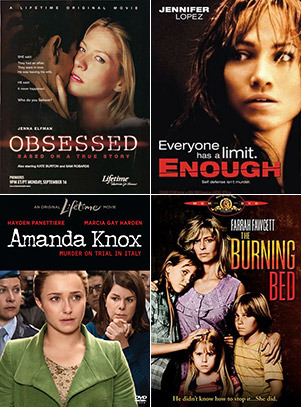 Showing that women have the power, one flick at a time.note L-R, top to bottom: Obsessed 2002, Enough, Amanda Knox: Murder on Trial in Italy, and The Burning Bed.
Advertisement:

A genre of Made for TV Movies, also known as "Women in Jeopardy," that feature similar plots and thematic elements — mainly aggrieved women and their struggles to find empowerment of one sort or another.

The Trope Namer is Lifetime, a cable TV channel in the United States with programming geared toward female audiences (or, at least, female audiences who conform to Lifetime's conception of its target demographic), which is well known for giving rise to the subgenre. Original movies are such a bedrock for the Lifetime brand that it has a spinoff network devoted entirely to them (LMN).

Despite being the Trope Namer and Trope Codifier, Lifetime didn't invent the genre. Starting in The '80s, the major US networks added stories in this fashion to their Made-for-TV Movie lineups, and saw them get phenomenal ratings. Hollywood studios even got into the act with films like Not Without My Daughter and Sleeping with the Enemy. Lifetime itself got into the business with the 1990 movie Memories of Murder, starring Nancy Allen as a victim of Easy Amnesia who gets stalked by a deranged man. Its success pushed them to make more movies. Meanwhile, The '90s also saw NBC revamp their Monday Night at the Movies series to appeal more to young women. The result was a whole slew of ripe Melodrama movies loaded with familiar TV faces, including the immortal Mother, May I Sleep With Danger?, starring Tori Spelling. As the other networks began to move away from TV movies, Lifetime became the home of the subgenre, adopting the other networks' movies and the theatrical films and airing them frequently, to the point that "Lifetime movie" is now a generic description (Indeed, only two of the movies in the page image above were actually produced for Lifetime).

The four basic plots of the Lifetime Movie of the Week can be summarized as follows:

In all cases, she must fight not only against her problems, but also against the Uncaring System that refuses to believe her or even accuses her of being the villain. Anyone on her side is unable or unwilling to help her, except for one person, typically male, who comes to believe in her or her plight and comes to her rescue at the end, but not before she's been put through a Trauma Conga Line.

One reason for the films' similarities is that they are designed to play on the fears of their target demographic. Thus, the themes of violent or uncaring men, female rivalries, smothering mothers, difficult children, and absent support systems are prevalent. Though notionally intended to send a message of empowerment by having the female triumph, it can seem like they have the opposite effect, as the world is depicted as harshly uncaring and even antagonistic toward "good" women, and rarely does a protagonist succeed without help from a male ally. For the same reason, expect Ripped from the Headlines and Very Loosely Based on a True Story to come into play (and be heavily advertised).

For the opposite, see A Hallmark Presentation, named for the Hallmark Hall of Fame series of films which, appropriately for a greeting-card company, tend towards the other end of the scale.

open/close all folders
Tropes common to the subgenre