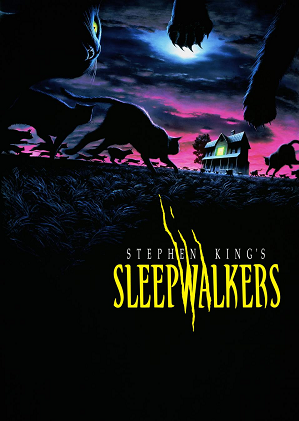 They feast on your fear - and it's dinnertime.
An odd little 1992 film based on an unpublished book by Stephen King, Sleepwalkers follows the story of Charles Brady (Brian Krause), and his mother Mary (Alice Krige), a pair of soul sucking cat demons called Sleepwalkers. The Sleepwalkers have apparently incredible powers of illusion, but are critically weak to ordinary housecats.
Advertisement:

The titular Sleepwalkers move into the town of Travis, Indiana, and try to find a virgin to suck the life out of. Charles starts trying to seduce Tanya (Mädchen Amick), who is apparently a virgin. Their relationship goes a little south, when he tries to suck her soul on the first date, and a police officer shows up with an attack cat named Clovis. Charles is injured, and his mother begins a Roaring Rampage of Revenge. There are a few random car chases and murders to round out the movie.

It's also notable for being Stephen King's first collaboration with director Mick Garris.