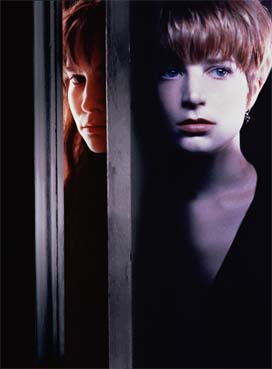 Allie's new roommate is about to borrow a few things without asking. Her clothes. Her boyfriend. Her life. Living with a roommate can be murder.
Advertisement:

A 1992 suspense/horror film directed by Barbet Schroeder based on the novel "SWF Seeks Same" by John Lutz.

After breaking up with her boyfriend, Allie (Bridget Fonda) gets a new roommate, Hedy (Jennifer Jason Leigh). They become the best of friends. Then things start to get weird. Like when Hedy gets the same haircut as Allie. This is not going to end well.

In 2005, a straight to DVD sequel titled Single White Female 2: The Psycho was released. Only the basic premise of a killer roommate is the same with none of the characters from the original film appearing.

In 2009, a spin-off titled Single Black Female was released. Like Single White Female 2, the basic premise is the only thing it has in common with the original. No characters from the original film appear.