Film / Sinbad and the Eye of the Tiger 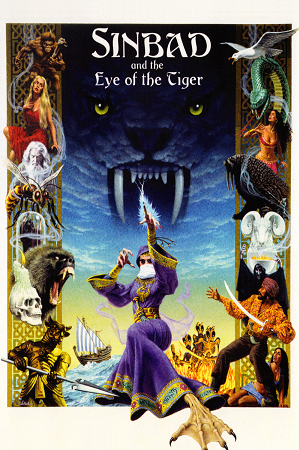 This incarnation of Sinbad is due to marry the beautiful Princess Farah (Jane Seymour), but when he returns to her kingdom he and his crew are ambushed by monsters. The creatures are dispatched relatively easily, but the princess reveals to Sinbad that their troubles aren't over. Her brother, Prince Kassim, was about to be crowned Caliph when his wicked stepmother Zenobia cast a spell that turned him into a baboon (animated by Harryhausen). If he isn't turned back into a human soon, Zenobia's equally wicked son Rafi will be crowned Caliph instead.

Sinbad and his crew, with Farah and Kassim in tow, head out to consult the great sorcerer Melanthius (Patrick Troughton). He and his daughter Dione join the adventure as they all head for a lost, fertile city beyond the Arctic wastes where a magical energy that can reverse the curse can be found. All the while, Zenobia and Rafi, via a boat rowed by a clockwork minotaur, are in hot pursuit.

Not to be confused with that other Eye of the Tiger and its cult song.

Sinbad and the Eye of the Tiger provides examples of: