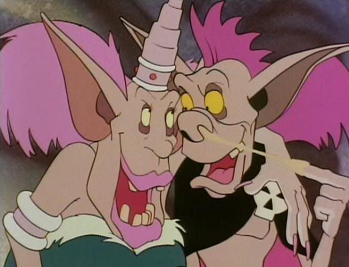 Morathi: And with these ashes my son, we have our revenge.
Malekith: No. I've only begun.
— Dark Elves Trailer, Total War: Warhammer II
Advertisement:

This is a case when a villainous case of My Beloved Smother uses her son as a pawn and an accomplice to further her own ambitions. Maybe he's a Manchurian Agent whom she aims to get into a position of power so that she can wield power with him as her puppet or maybe she just treats him as a standard Mook in her criminal plans. Or maybe he's her Dragon. The son himself may be a weak-willed and not particularly evil individual who goes along with his mother's twisted machinations out of a sense of loyalty to her, combined with love and fear, or maybe he's a willing participant. In some cases he's a Dragon with an Agenda whose snarkiness towards his mother indicates that he's planning on becoming The Starscream and maybe even a Self-Made Orphan! Or he may pull a Heel–Face Turn. As for the mother, domineering as she is, she may absolutely dote over her son or verbally abuse him and put him down at every turn. Or a mixture of both. In any case, Villainous Incest is all too frequently a subtext here, making this a particularly squicky trope and a frequent source of Nightmare Fuel. It also commonly overlaps with Extremely Protective Child, when the son will do anything to protect his mother.

Overlaps with The Family That Slays Together.