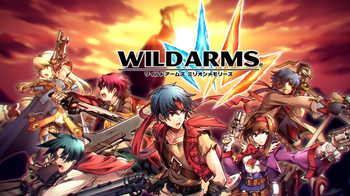 Wild ARMs: Million Memories is the latest entry to the Wild ARMs series for the iOS and Android. Released in September 26, 2018, the story is an Adaptation Amalgamation Crossover that brings the heroes of every existing Wild ARMs game together to save Filgaia from the brink of destruction.