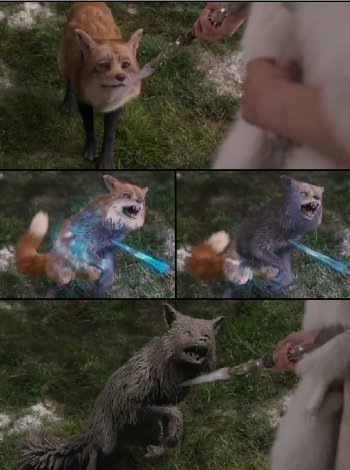 We'd ask whether that hurt, but we're afraid the fox is a little too stoned to answer.
"Defeated by an ugly crone,
From mortal man to standing stone,
With sun and rain upon you blown,
Through carven locks the wind shall moan,
Here you will be through years unknown,
And slowly crumble when time has flown."
— Game Over Screen, Conquests of Camelot
Advertisement:

A character has been petrified — literally. Transformed into stone (or another inanimate substance) by someone else, the archetypal result is a perfectly sculpted gray (concrete?) statue, complete with matching gray clothes and accessories, frozen in whatever position they were in when the spell took effect, presumably for all time. Heed well, traveler: Should you ever stumble upon a cave filled with impeccably detailed life-size statues showing expressions of terror on their faces, be smart and turn back now.

The ability to transform someone in this manner is a fairly common Stock Superpower, especially if combined with an "Evil Eye". Definitely Older Than Feudalism, being fairly common in Classical Greek myth as well as Fairy Tales. If the victim isn't killed outright, he might be in some sort of stasis. At worst, he'll remain conscious while frozen in a form of locked-in paralysis, sometimes accompanied by inescapable pain or anguish. However, it's generally accepted that shattering the statue kills the person held within... hopefully.

More likely to produce Tears from a Stone than most rock — but still not very likely.

It does not count if they transform and untransform on their own (unless they cannot move, such as in Dragon Tails

and Super Mario Bros. 3). If the character can transform on their own and remain mobile, then this is an Elemental Shapeshifter.

Petrification happens a lot in children's media, because, unlike death, it is usually reversible thanks to No Ontological Inertia.

If a villain knows that this effect can be potentially reversed, you can expect them to consider smashing the "statue" to ensure the person cannot be brought back.

There is often some ambiguity as to whether the petrified person is completely turned to solid stone, or whether they are merely 'encased' in a thin layer of stone in a manner similar to Harmless Freezing. You can often see this ambiguity when a character is only partially petrified - they will seem only to be lightly encased in stone, and can sometimes still break out. This is probably to avoid the circulatory problems that would arise from having a completely petrified limb.

In some works, petrification may also be used as a magical equivalent of Human Popsicle by simply turning a person into stone and wait after a certain amount of time has passed to unpetrify them. Your body can't physically age if it's turned to stone.

If character is turned into flora rather than petranote a plant instead of a rock, it's a Transflormation. See Wax Museum Morgue for a similar trope when the monster (or whatever) that petrified the people decides to put them on display in a gallery. Compare Mistaken for Granite.

Not to be confused with The Stoner, which is somebody getting stoned in a...different way.