Loads and Loads of Sidequests 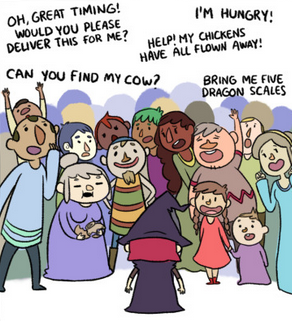 When a video game contains a truly baffling number of Sidequests and other odd jobs. Many games thrive on replay value, and so with more stuff to do in more varieties of ways, a game in theory, gains more replay value and thus general value.
Advertisement:

Often it's a wonder the Player Character has time to do them all with the world about to end/be taken over/succumb to darkness/all that generally not nice stuff.

Western RPGs in general tend to have a relatively short 'main' questline, with the majority of content being in the form of sidequests. Depending on how the difficulty/balancing works, it will often be expected that the player spend some time on side missions between parts of the plot in order to earn new abilities and equipment before pushing on to harder areas.

Games that feature this generally fall towards the open end of the Sliding Scale of Linearity vs. Openness. Compare Sidetracked by the Gold Saucer, where a particular sidequest is so good and addictive it might distract one from the main quest altogheter, as well as Quicksand Box, when the sidequests are so expansive one gets confused on what one should actually be doing. See also Play the Game, Skip the Story.