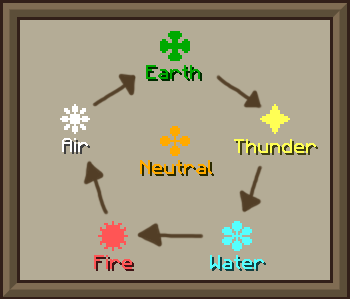 It's non-elementary, my dear Watson.
With Elemental Rock–Paper–Scissors, that means everyone and thing has strengths and vulnerabilities to everything else. Except for those that are "outside" the system, that is.
Advertisement:

A Non-Elemental spell, power or monster will be the elemental equivalent of the Jack-of-All-Stats: no weaknesses, but no noteworthy strength. Despite this "averageness", the Non-Elemental's greatest strength is that they can bypass most elemental resistances and strengths, making them effective against elements or types that have no or rare weaknesses and especially effective against enemies that are immune or resistant to numerous elemental types. That it's so well balanced means it can work in just about any situation on top of that, too.

Thematically, a Non-Elemental character may be described as using raw Ki or Mana, or some fundamental cosmic force at the center of the elemental system. Alternately, it may have developed a power that somehow bypasses the element system or fuses them all together. For these reasons, Non-Elemental characters and powers are sometimes considered advanced magic that is hard to master or acquire, and may be valued as Game Breakers. They may cross over with Infinity +1 Element due to this. Note that Non-Elemental powers are usually, but not always, distinct from "physical" attacks.