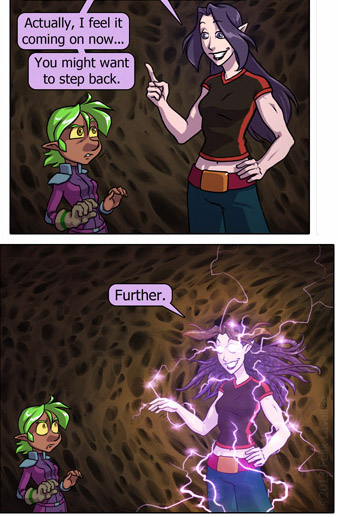 The "useful but explosive" kind. And so is her magic!
"When I sensed this place, the afterglow of so many spell cast all at once, I couldn't make heads or tails of it. ... With thousands of people under your thumb, all interacting with each other according to complex storylines. ... You're even running illusions miles away on the edge of town! Magic on autopilot!"
— Agatha Harkness, WandaVision
Advertisement:

Magic and powers with a "chaotic" theme. Often referred to as "chaos magic", "wild magic" (not to be confused with the Wild Magic trope) or, more fancifully, "entropic magic" or variants on that name. Sometimes appears in settings with an Order Versus Chaos cosmology, but can pop up anywhere.

It can function in many different ways, but frequent traits include: high randomness and uncontrollability, probability manipulation, and inducing accelerated decay and destruction, depending on how the writers understand the concept of chaos and entropy.

"Entropy" in particular is one of these scientific concepts which appeals to writers due to its cool, sinister-sounding name and its association with decay. In real life, "entropy" is a physical concept, roughly defined as a measure of disorder and chaos of a given system.note Strictly speaking, entropy is a constant multiplied by log of the number of microstates (distribution of particles by states) corresponding to same observed macrostate (set of observed macroparameters) of the system. Per the second law of thermodynamics, the entropy of an isolated system can only grow, never decrease; the only way to decrease the entropy is for some external force to do work on it.note Think about how a messy room will only get messier over time, and it takes someone deliberately cleaning up to restore it to a more ordered state.

Since the universe itself (as far as we know) is an isolated system with no external forces that can affect it, this suggests that eventually it will succumb to "heat death of the universe": eventually all organized systems will break apart.note Ironically, despite people usually conflating this idea with chaos, the heat death of the universe will result in the most ordered state the universe has ever seen: a sea of matter stretching evenly and uniformly across the entire universe in all directions until the end of time, assuming quantum mechanics does not produce a new Big Bang — forever is a long time, after all, and the physics of such extremely low conditions of temperature and density, where quantum effects would prevail, are thought to be poorly understood. This is actually a basic fact about entropy, as higher entropy states tend to be more "soupy." Hence why chaos-based entities tend to have an Omnicidal Maniac vibe to them.

Chaos Magic also exists in real life. It is a Postmodern esoteric practice that eclectically borrows from older magical traditions in order to create new rituals. Notable Chaos Magicians who have incorporated it into their work include William S. Burroughs, Grant Morrison, Timothy Leary, and Die Antwoord. The other Wiki has more.

Might be related to Antimatter, Power of the Void, and Casting a Shadow.