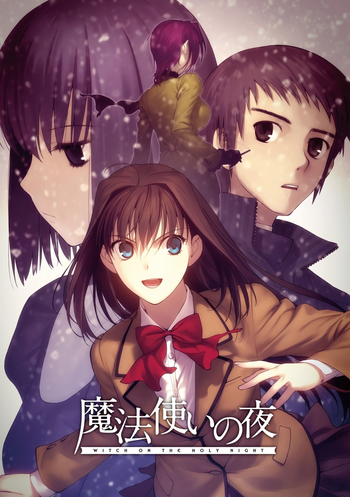 It was said —
There was a mansion that rested on top of a hill, and within it there lived two witches.
Advertisement:

It is the late 1980s. Rumors of a witch living inside an old mansion circulate in the city. Unbeknownst to observers, living inside the mansion is an actual witch, Alice Kuonji, a stoic woman and a magus hiding in the present day. Under her tutelage studies Aoko Aozaki, a high school student studying magecraft as the head of the Aozaki family. As magi, the two of them secretly fight any threat that enters their town.

Things start to change when a young man unfamiliar with city life, Soujuurou Shizuki, enters their lives. Slowly, he affects the lives of these two magi. And so their story begins...

Witch on the Holy Night, known as Mahou Tsukai no Yoru - Witch on the Holy Night in Japan, is a Visual Novel set in the Nasuverse, serving as prequel to both The Garden of Sinners and Tsukihime. Originally a five-hundred-page novel penned by Kinoko Nasu, it was never publicly released and only a handful of copies were distributed. It was announced for a visual novel remake in 2008, but it got stuck in Development Hell several times before finally being released on April 12, 2012.

Unlike other Type-Moon visual novels, Witch on the Holy Night is a linear novel with no branching plot lines. It is also Type-Moon's first all-ages visual novel.

The game has two sequels planned, but Word Of God is that serious production won't start until the Tsukihime remake is finished. Here we go again.

A movie adaptation by longtime Type-Moon collaborator ufotable was announced in December 2021, targeting a late 2023 release. A fully voice-acted version of the visual novel is planned for release on December 2022 for the PlayStation 4 and Nintendo Switch. It was announced in April 2022 that the port would also come with translations in Traditional and Simplified Chinese, and English, making it the first Type-Moon visual novel with an official translation in all three languages. Furthermore, Aniplex of America will give it an official release at the same time in the US in English, making it the first Type-Moon visual novel to get an international release outside of Japan. Watch the English release announcement trailer here

Not to be confused with a manga called Mahou Tsukai no Yome.