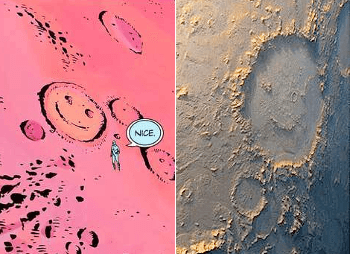 A smiley face on Mars?

A story element that exists or existed in Real Life but is assumed to be fictional by the audience, often because it seems too unlikely, bizarre, or kitschy to be real. Sometimes truth really is stranger than fiction...

was real. They were an early form of artificial tree with metallic needles, not a hollow metal cone as shown in the film, but they definitely existed, and you could even get them in pink. They were usually called "tinsel trees", which is the name under which they are marketed today. There are many videos on YouTube showing how to set up, restore and repair them.note  And you can buy them

So why do viewers assume these shiny spruces must be fictional? Well, as it happened, A Charlie Brown Christmas so thoroughly reduced the appeal of the tinsel tree that sales plummeted, and they all but disappeared by 1971.note It wasn't the end for artificial trees, but the fashion turned toward verisimilitude instead of an openly-synthetic look. And as mentioned above, the tinsel tree is still for sale and is even making something of a comeback.

In short, this trope is in play when a quaint element of Real Life appears in a work of fiction and is mistaken for part of the fiction. The reason is usually simple unfamiliarity with the object, so it is more likely to trip up those viewing the work from a different perspective (e.g. years after the work was created, or from another culture). Most "aluminum Christmas trees" are, like the original, a bit out-of-the-ordinary and kitschy; even so, it's immensely funny (to those in the know) when the audience dismisses a Real Life element as patently absurd and "unrealistic".

This can also occur in period pieces where the writers did do the research, but the truth they uncovered is so bizarre or surprising that audiences think they must have just made it up. In this case, writers may add a "Not Making This Up" Disclaimer. Of course, the fact that something exists or existed doesn't necessarily imply that it was common enough to just show up in the chronological and spatial span of the work, or at the frequency which it does. This is why period pieces in which all the costumes (or other aesthetic elements) are reconstructions or composites of documented outfits still manage to be fashionable for the period that the works themselves are written/produced in.

Compare Technology Marches On, "Seinfeld" Is Unfunny, Widget Series, Defictionalization, and Poe's Law. A subtrope of Reality Is Unrealistic, Values Dissonance, and Truth in Television. Can also be used as a means of Shown Their Work. Frequently found in Unintentional Period Pieces. If even the creators were unaware that the "tree" was real, it's Accidentally Correct Writing.

When this occurs in-universe, it's either Eskimos Aren't Real, or the work will give a "Not Making This Up" Disclaimer.

Nothing to do with the Christmas tree the Skylab astronauts made from left-over aluminum cans.

It could simply be a case of Small Reference Pools.