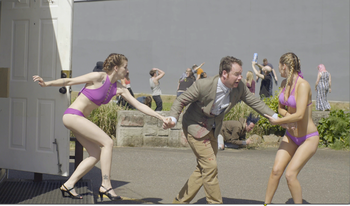 Series Regulars Robin, Hinkler and Cassie
Hinkler:I think the problem is a matter of idealogy. For instance, at Hot Bikini Beans we serve fresh locally brewed coffee but we also sell sex appeal. So, while you drive up and order your double-shot hot vanilla latte, you also have a shot at looking at our double-hot vanilla hotte's...those two...

Hot Bikini Beans is a web based Dark Comedy series created by Degenerate Life in association with Vanjam Productions LLC. Episodes are available to view on YouTube. The show centers around the employee's at a coffee stand that serves hot and cold beverages with the added visual appeal of bikini-clad baristas, Cassie and Robin. Between the array of misfits and eccentric characters that frequent the coffee stand and the constant scheming of their buffoonish, inept yet ambitious Unsympathetic Comedy Protagonist of a manager, named Hinkler, there is never a dull moment at Hot Bikini Beans.

Hinkler:Oh give me a break, Cassie, don't think I don't know about "Titty Tuesday's". You keep that up and someone's gonna call the cops.
Cassie:The cops LOVE Titty Tuesday's!