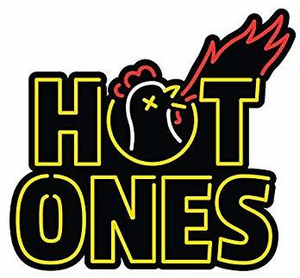 What's going on, everybody? For TV Tropes, I'm Sean Evans, and you're reading about Hot Ones. It's the show with hot questions and even hotter wings!

Running on YouTube since 2014, Hot Ones is one of your more unique celebrity interview shows. Guests are offered a succession of ten increasingly-spicy wings, and they have to answer each question to the best of their ability as their mouths light up. Some cry, some have to take a lap, a few have puked (off-camera, thank goodness), and at least one had an accident. Most take advantage of the lack of censorship. But most make it through, lest they join the likes of Ricky Gervais and DJ Khaled in the Hall of Shame.

Sean Evans has been the resident Dungeon Master since the show's inception, dabbing and suffering along with the guests. The channel hit a million subscribers in 2017, which it celebrated by inviting superfan Brett Baker to grill Sean. Sean also appears in other videos for First We Feast and their parent site, Complex. Peppers, however, are never too far behind him...

A Recap page is under construction.