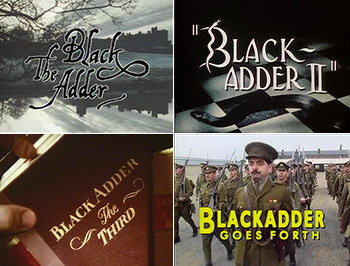 "Aqua United Patrol Squad 1 is not at all a stupid title for the new season of Aqua Teen Hunger Force which everybody knows and loves and why you gonna mess with SOMETHING THAT AIN'T BROKE?!"
— Anonymous Carler, promo

for Whatever-the-Hell-Title They're Calling It This Season
Advertisement:

A title change in an ongoing series, prompted by some plot event, a break in production or switching between publishers. Frequently, but not always, involves adding a new subtitle or suffix. Despite the name, does not have to occur at the start of a new season.

In some cases, producers will pass off an essentially new series as a renamed Retool of an existing series just to preserve its distribution channel. This was once common in American comic books due to a quirk of postal regulations

. Publishing a new title required a new postal code for second-class mail subscriptions and, thus, a new postal fee as well. To avoid paying the fees, instead of just canceling one book and starting up another with issue #1, they would give the old series a title change... but not too much of a title change, so as to avoid the wrath of the Postal Service.

Can be an attempt to avert an Artifact Title.