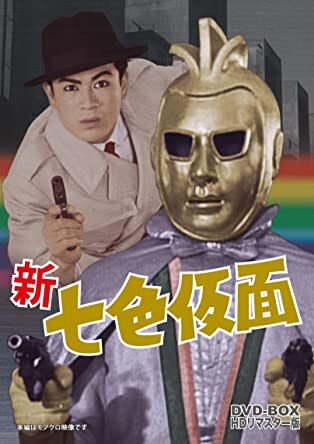 Seven-Color Mask (Nana-iro Kamen) was a tokusatsu superhero TV series created by Kohan Kawauchi, who previously created Moonlight Mask. Aired in black-and-white, it was was the first superhero TV series by Toei Company Ltd.. It was broadcast on NET (now TV Asahi) from June 3, 1959 to June 30, 1960, with a total of 57 episodes divided into 7 segments. Aside from being Toei's first TV superhero show, this series was also the debut of actor Sonny Chiba, who was 19 at the time, who took over the title role from Susumu Namijima after Episode 32.
Advertisement:

A Spiritual Successor to Moonlight Mask, Seven-Color Mask was itself followed by Messenger of Allah, another Kohan Kawauchi show which starred Sonny Chiba as the lead.