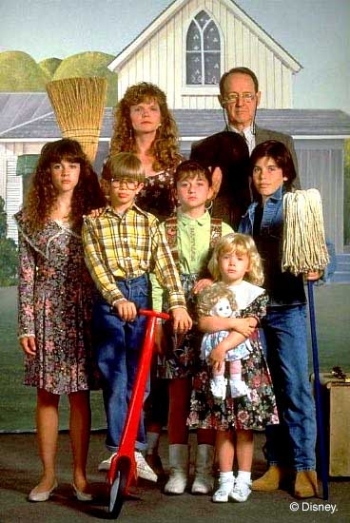 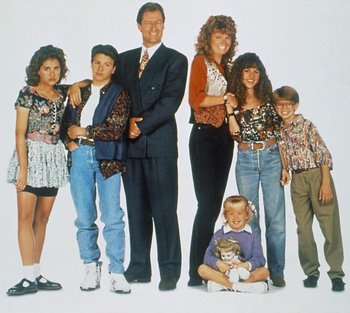 An American sitcom that aired on NBC from 1991 to 1993, about a family named The Torkelsons.

Between Season 1 and 2, it got a name change and such a drastic Retool that the two Seasons can essentially be considered two separate shows.

The titular family of a single mom and her five children live in the very small town Pyramid Corners, Oklahoma. Financially struggling as her husband has abandoned the family, Millicent takes in a boarder (Mr. Hodges) to help make ends meet. The children are:

The show isn't a ratings success, but NBC renews it for a second Season. Thoroughly altering it though, its name is changed to Almost Home and it gets a profound Retool. Two of the five Torkelson children are removed from the show (never to be mentioned again) and the remaining family moves to Seattle, drastically changing the setting. They move because Millicent takes on the job of live-in nanny of the Morgan family, whose house they move into. The Morgans are widowed father Brian, and his teenage children Gregory and Molly.

The changes don't help the show much, and this time, NBC axes it. The series then plays in reruns on the Disney Channel for the rest of the decade.

The Torkelsons (Season 1) contains examples of the following tropes:

The Torkelsons and Almost Home both contain examples of the following tropes: