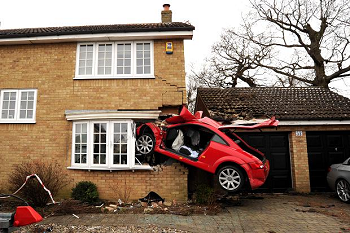 "It's a large brick house. You can't miss it."
"You know, you never really know a car until you've driven it through a wall. This little baby did good!"
— Sam Axe, Burn Notice, "Devil You Know"
Advertisement:

A comedy trope where someone drives a car straight into a building. It's usually designed to poke fun at the driver, either because they Drive Like Crazy, are too old or too young to drive, are driving The Alleged Car, have a wonky navigation system, or maybe just aren't paying attention. It doesn't always have to be a house, but it usually is, largely to get a comedic reaction out of the unfortunate inhabitants of said house.

It's almost always Played for Laughs, and more interestingly, with no lasting consequences; nobody gets hurt, nobody gets emotionally traumatized, the car usually stops right after crashing through the wall and thus minimizes the damage, and the house is usually right back to normal in the next episode. Compare this to Real Life, where driving a car into a building can cause serious and lasting damage to the driver, the car, the building's occupants, and the building itself. As always, Tropes Are Tools, and it can be Played for Drama with more realistic consequences, but unless it's done on purpose (and sometimes even then), it's usually difficult for the audience to take this trope seriously.

The trope was most pervasive in sitcoms in The '80s and '90s, but it's still common since then (if only because sitcoms have such a tendency to recycle each other's plotlines and tropes). That's another reason why it's so common to drive into a house — many sitcoms will mostly take place in such houses.

See also There Was a Door.