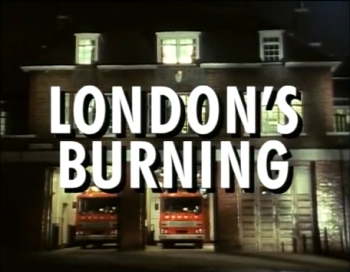 A long-running British drama series about the London Fire Brigade which aired on ITV from 1988 to 2002. It began with a one-off 1986 TV Movie written by Jack Rosenthal (of Coronation Street, That Was the Week That Was and Spend Spend Spend fame) and fourteen series followed. It was typically broadcast in hour long episodes at 9pm on Sunday nights.

London's Burning centres around the Blue Watch firefighters stationed at the (fictional) Blackwall station in south east London.note In fact, the station was the then-operational Dockhead Fire Station, and many scenes were filmed there. Intended to accurately showcase the work of firefighters, each episode would feature at least one "shout" (emergency), which varied from huge blazes and road accidents to cats stuck in trees. The show's peak is generally considered to be series 1-9, when the emphasis was on the camaraderie between the group, black comedy and drama, and spectacular stunts and pyrotechnics. It had an Ensemble Cast which changed over time.

London's Burning was very popular at its peak in the early to mid 1990s, attracting television audiences of over 16 million. Its appeal steadily waned as popular characters left (and, frequently, were killed off), the show's iconic theme tune was changed and it adopted more soap opera-esque plots, with greater emphasis on the firefighters' personal lives and less action and drama.

Tropes seen in London's Burning include: