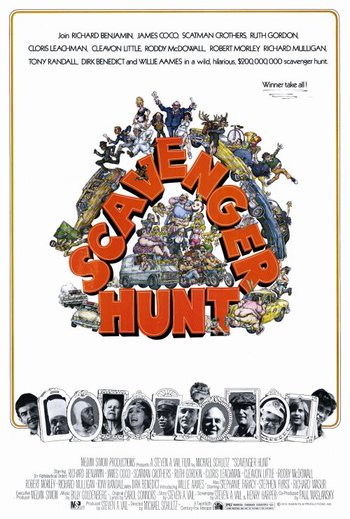 Mildred Carruthers: Why, that worm! What's he trying to prove? Georgie and I are his legitimate heirs (bangs fist on desk). Why should we have to play some dumb game just to get what's rightfully ours? I'm going to contest this will!
Charles Bernstein: That's the point, Mrs. Carruthers. This will is a contest.
Advertisement:

The plot centers around, well, Exactly What It Says on the Tin. Specifically, a Scavenger Hunt arranged by the late game inventor Milton Parker (Vincent Price) for the $200 million in his will. There are five teams consisting of Mr. Parker's servants led by cook Henri (Coco) and valet Jenkins (McDowall), his greedy widowed sister Mildred (Leachman) with her dumb son Georgie and their Amoral Attorney Selsome (Benjamin), son-in-law Henry Motley (Randall) and his four kids, nephews Kenny and Jeff Stevens, and cab driver Marvin Dummitz (Mulligan). Hilarity Ensues.

The film is often considered to be unfunny for its premise, although some appreciate the cast.

"This trope is a contest":