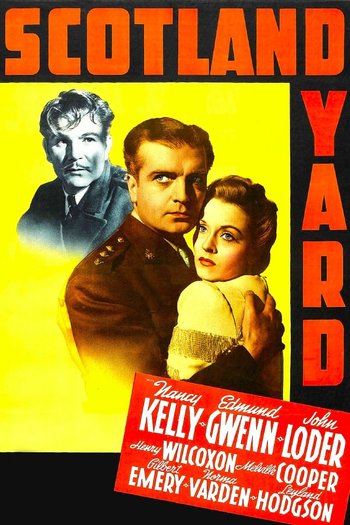 In Britain, while bank robber Dakin Barrolles is on the run from the police, he sneaks into the house of Sir John Lasher (Loder) and his wife Sandra (Kelly). He manages to escape once again from the Inspector Henry James Cork (Gwenn) of the Scotland Yard, but before absconding with a locket with pictures of the couple inside

Some time later Cork finally manages to track the robber down, discovering that he enlisted under a false name and became a soldier in Her Majesty's Army. Cork's intelligence says that Barrolles was killed at Dunkirk, but he is in fact still alive. His face was terribly mangled during battle and he was sent to a hospital in Scotland to recover. Since the doctors have no identification of the man, they look at the locket, which Barrolles is still carrying, and believe he is the man on the picture. They reconstruct his face so that he looks just like the picture, which is the face of Sir John Lasher. After Barrolles realizes this, he decides to play along and pose as Lasher, as he figures he can use it to rob Lasher's bank. Barrolles goes back to Sandra, pretending to be her husband returning from the war, and Sandra is happy with him returning as a different man than when he left her. Barrolles's plan of robbing the bank becomes complicated when he falls in love with Sandra and a man with a secret of his own discovers his impersonation.