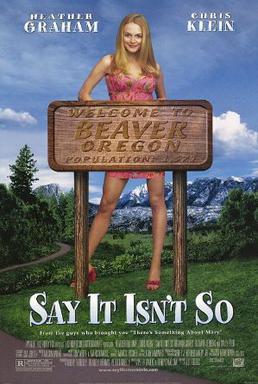 Say It Isn't So is a 2001 romantic comedy starring Chris Klein and Heather Graham. It was produced by the Farrelly Brothers.
Advertisement:

In the town of Shelbyville, Illinois, Gilly Noble falls in love with hairdresser Jo Wingfield. Unfortunately, just as they're about to tie the knot, a private detective shows Gilly proof that he is actually Jo's long-lost brother. Horrified at the thought that she had sex with her brother, Jo flees to Beaver, Oregon while Gilly tries to console himself with the fact that at least he apparently has a biological family. When it later turns out that Gilly isn't Jo's brother, he embarks on a quest to find her and bring her home.