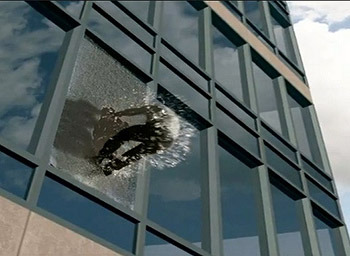 There goes Chad from Accounting...
"The dictionary defines defenestration as the act of throwing a person or thing out a window. [Spider-Man is thrown out the window of a skyscraper] Really not my favorite word."
— Spider-Man, The Spectacular Spider-Man
Advertisement:

The sad fate of many a Mook... mostly because it looks really cool. A sufficiently badass character punches, throws, or in any other way applies the force necessary in order to toss someone else through a window. A loud clangy window with shards rippling everywhere, at least in fiction. In Real Life, the window might be opened first.

How we see this trope typically depends on who is doing it. If a heroic character does it, we actually see them throw someone out the window, but typically not the very messy landing. With villains it's the other way around- to emphasize the cruelty. An ambiguously portrayed character may perform this feat, but you'll have to Take Our Word for It, since showing this trope usually inspires some sort of positive or negative feeling with whoever is doing it.

Bar Brawl Variants (particularly if it's set in the Wild West): Cut to street view of the pub. A character comes flying through the window onto the sidewalk, picks themselves up, and wades back into the fray with much-determined sleeve-pushing-up and angry muttering. Or it signals the end of the brawl.

A safety note: although fictional characters may be thrown through windows and get up again afterwards, in real life you can easily be killed by lacerations from large shards of broken glass, even when thrown through a ground-floor window. Live-action TV doesn't use glass for this at all, but specially-made panes of sugar, which is weaker and breaks into much less dangerous shards. In other words, Don't Try This at Home!

See also Glass Smack and Slide for the more comical subversion. When someone does this with an object that's Appliance Defenestration. Compare Railing Kill for bridges and balconies, Thrown Out the Airlock when Recycled IN SPACE!, Walk the Plank for ships at sea or in the air, and Death Flight for flying someone into the sky and "dropping them off". Contrast Super Window Jump, when someone does this to themselves, usually intentionally.

Might overlap with Disney Villain Death. Not necessarily related to The Window or the Stairs, despite the name.

And remember: It's Not the Fall That Kills You…

Example of:
The Thing That Would Not Leave

Alternative Title(s): Thrown Through A Window