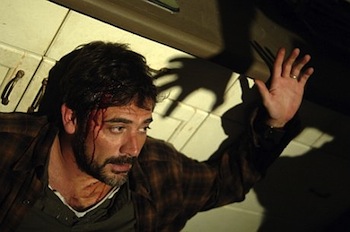 These things are shadow demons, so let’s light 'em up!
Sam: I mean, what are you gonna do when it's all over?
Dean: It's never gonna be over. There's gonna be others. There's always gonna be somethin' to hunt.
Sam: But there's gotta be something that you want for yourself...

Dean: Yeah, I don't want you to leave the second this thing's over, Sam.

Meg lures Sam and Dean to Chicago, Illinois, in an attempt to capture their father.

The brothers investigate a series of mysterious deaths in Chicago, Illinois, where all the victims are from their home town Lawrence, Kansas

. While investigating, Sam runs into Meg, whom he met when he decided to strike out on his own because he was tired of following his father's orders. Sam thinks this is too great a coincidence, but Dean's research reveals that Meg Masters does appear to be the woman from Andover, Massachusetts

, she claims to be. His research also uncovers that the murders are committed by shadow spirits called daevas

. Sam trails Meg and discovers that she is responsible for summoning the daevas. When they confront her, it's revealed that the whole thing was a trap to lure out their father John. Sam and Dean manage to turn the daevas against Meg. When they return to their motel room, they find John waiting for them. The daevas attack again and the Winchesters barely escape. Dean realizes that them staying with John puts them all in greater danger, since John drops his guard around his sons, so John leaves on his own.

For this episode = 1 human.