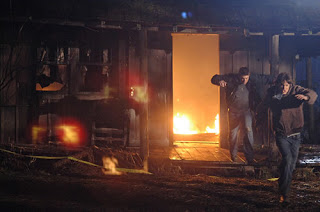 Of all the things we hunted, how many existed just because people believed in them?
Dean: People believe in Santa Claus. How come I'm not gettin' hooked up every Christmas?
Sam: 'Cause you're a bad person.

The brothers get a tip about a cabin haunted by a ghost named Mordechai Murdoch in Richardson, Texas from Hell Hound's Lair

, a website run by amateur paranormal investigators Ed and Harry, but when they investigate, they realize that the supernatural creature described on the website isn't a ghost but is a Tulpa that has been brought into being by the belief of everyone who reads the site. They try to manipulate the website to give the Tulpa a weakness, but the website server crashes before it can come into effect and the brothers are forced to burn the house to stop the creature and save the hapless Ed and Harry. Dean and Sam are also embroiled in an escalating prank war throughout the episode, which ends when they both prank Ed and Harry instead and call a truce.

For this episode = 1 human.