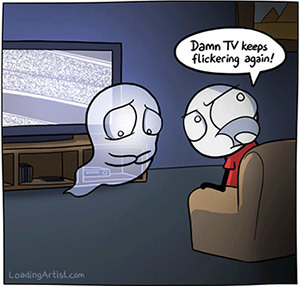 From the night of Brad's stage dive. All of a sudden, I'm getting electromagnetic readings up the wazoo. For some reason, it's a legit haunting now.
— Dean Winchester, Supernatural
Advertisement:

When they're not tormenting humans or scaring pets, ghosts are interfering with technology, appearing on video screens, making radios and TVs crackle and playing with the lights. Alongside cold spots, EM interference is one of the "recognized" signs of a haunting. One variation, known as EVP (electronic voice phenomena), specifically involves anomalous voices or other sounds on electronic audio recordings. Ghosts also appear on camcorder screens, night vision cameras, and of course, infrared cameras.

An electromagnetic ghost may be a Walking Techbane if the interference is strong enough.

Not to be confused with Virtual Ghost (which is a "ghost" projected by technological means); Haunted Technology, (when the ghost is actually inhabiting a machine); or Ghost in the Machine (which is nothing to do with ghosts at all). This trope covers any supernatural activity that makes electrical systems malfunction as a side effect of their presence.

Please note that this often happens in worlds that do not have magic as such but still have ghosts.