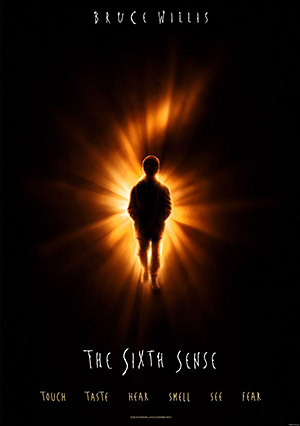 The Sixth Sense is a 1999 horror/thriller written and directed by M. Night Shyamalan, starring Haley Joel Osment and Bruce Willis.

Successful child psychiatrist Malcolm Crowe (Willis) is shot and injured in his home by a disturbed former patient of his, who commits suicide immediately following the shooting. Months later, a still-shaken Malcolm comes across the case of ten-year-old Cole Sear (Osment), who is exhibiting exactly the same symptoms of his former patient: frequent panic attacks, social withdrawal, and unexplained injuries. Seeing a chance to redeem himself by helping Cole, Malcolm takes a special interest in Cole and begins counseling him. Learning the secret behind Cole's condition, however, only makes things stranger than Malcolm could have imagined.