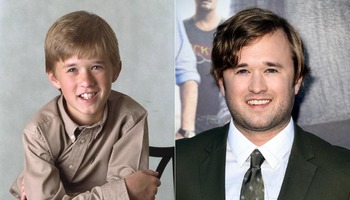 "The best advice my dad ever gave me is that acting is believing. Acting is not acting. It isn't putting on a face and dancing around in a mask. It's believing that you are that character and playing him as if it were a normal day in the life of that character."
Advertisement:

Haley Joel Osment (born April 10, 1988 in Los Angeles, California) is a former child actor well-known for his roles in the early 21st century and often being seen as a premiere example of averting the general assumption that children can't act. In the film community, he is best known as Cole, a boy who sees dead people, in The Sixth Sense; in the gaming community, he is best known as Sora in the Kingdom Hearts series English dub. He is also becoming increasingly known for live action roles in quirky, character-driven comedies such as the movie Sex Ed and the television series The Spoils of Babylon.

He is the older brother of Emily Osment, famous for playing Lilly in Hannah Montana and Gabi in Young & Hungry.