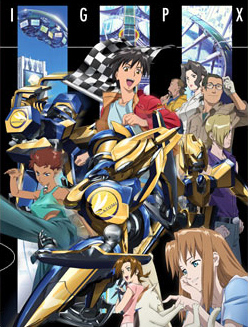 "In the year 2049, the world's most popular mobile sport is the Immortal Grand Prix..."
"From the studio that brought you Ghost In The Shell, Cartoon Network is proud to present the first Toonami original series: IGPX."
Advertisement:

Winning the minor league championship, IGPX-2, with sheer luck, Team Satomi is promoted to compete with five teams in the IGPX-1 division, home to the best of the best. The rookie team consists of Takeshi Jin, a talented hotshot, Amy Stapleton, who at thirteen is a prodigy, telepathically linked to her feline co-pilot Luca, and Liz Ricarro, a hotheaded martial artist. Supporting the pilots on the sidelines: owner and supervisor Michiru Satomi, mechanic Mark Ramsey, assistant Jessie Martin, backup pilot River Marque, and coach Andrei Rublev. Together they form a close team as they reach for the crown.

The sport IGPX combines motor racing with Roller Derby, via teams consisting of three Humongous Mecha and their pilots. Races consist of 180 miles of track, with much of that length suspended hundreds of feet in the air in loops, tunnels, turns, and diverted side-tracks. After the first lap, competing teams are allowed to use their mecha to disable or slow down those of the other team in an all out melee at 350mph (565kph). At their discretion, racers may transform into a high speed mode in the third and final lap... if their opponents are kind enough to let them.

Originally rejected as a series when pitched to Cartoon Network, a Microseries was released in 2003 as a replacement in Toonami's Total Immersion Event. Ratings were high enough, and viewer response good enough, that it was picked up as a 13-episode series airing in 2005. A second season began airing in 2006, but got moved from Saturdays at 10:30 to Friday at midnight.

IGPX enjoyed time on the revived Toonami block, airing at 2:30 AM. On October 19th, Toonami aired the last two episodes back-to-back at 2:30 and 3:00 AM as a "one-hour finale", pre-empting Star Wars: The Clone Wars for one night. Afterwards, the show moved to 4:30 AM for its second run, and was taken off the air to make room for Attack on Titan once that run was finished. It now currently resides off the air in Toonami's "Regular Rotation" of shows they permanently own the rights to.

The series' DVD release was handled by Bandai Entertainment, which meant that the show went into licensing limbo when they halted DVD production entirely. Thankfully, the series has been picked up by Discotek Media for a rerelease, meaning that those who wish to watch it no longer have to rely on YouTube or Toonami reruns.