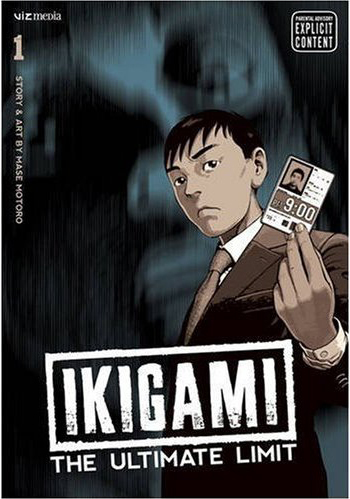 "May you rest in peace."
—Final line of text on an ikigami
Advertisement:

Ikigami: The Ultimate Limit is a seinen manga series written and drawn by Motoro Mase, which was serialized from 2005 to 2012 (starting out in Weekly Young Sunday before moving to Big Comic Spirits in 2008). Probably the best way to describe it is "put Battle Royale and Death Note in a blender and hit 'puree'." That said, the story goes far beyond such a simple explanation.

On the first day of school, every child receives an inoculation. Most of them will live their life to its natural conclusion; a small percentage is randomly injected with a nanocapsule, set to activate itself at a certain point of its life, between the age of 18 and 24, rupturing the aorta and killing the possessor instantly. Nobody knows if they are to be chosen until their last day has come: a messenger from the Ministry of Health and Welfare is sent to deliver a notification of death, informing the victim that they have only 24 hours left to live. Those notifications are called ikigami - literally "death papers".

Ostensibly, the government, through the "National Welfare Act", does this in order to encourage its citizens to be grateful for life. The series has both serial and episodic elements - while the series is divided into Episodes revolving around the story of a single ikigami recipient and their last day alive, there is also a larger story arc involving Musashigawa-cho's ikigami messenger, Kengo Fujimoto, and his complex and tortured relationship with his job, the Act, and the people he meets; as well as an arc involving how the Act is seen by society, both in public and in private - and several of the Episodes see the different arcs cross and collide.